To Maintain the Vulcan Motorcycle 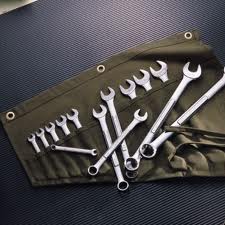 The Vulcan 900 needs a valve adjustment before we go out west on an estimated 10,000 km trip.  I was struggling with the idea of taking it in to the shop to have it done.  "Do-it-yourself" or DIY used to be almost a religion with me, but I find myself falling away from the true path of righteousness.  I considered the advantages of doing it myself before actually taking it to the shop.  I enjoy adjusting valves if the task is reasonably well thought out.

I would like to replace the fuel level sensor at the same time, because it has not worked since last year.  I suppose I could get the mechanic to do that, but I want to make a little change before it goes in - I want to bend the float arm to calibrate the fuel gauge to read "E" for "Empty" and not "E" for "Eight litres of gas left" or "Early gas stop might be nice".

I ordered a new sensor and gasket from Two Wheel Motorsport (The dealer I bought the bike from).  It's about $80, and another $14 for the gasket.  I gave my credit card number over the phone because they need a $50 deposit, as it's not in stock.  If I had ordered it myself, from www.cheapcyclepart.com it would have been $62.66 and $13.82.  That's a real website by the way.  But I like to support my local dealer, and even more important, if the new part is defective or wrong, I find it much easier to return it to the dealer than to a website.

The Vulcan 900 manual has a lot of annoying go-to's with no page numbers provided.  The Valve adjustment section sends me to "Engine top end chapter" to find out how to remove the valve covers, which in turn refers me to "Fuel System chapter" for how to remove the tank, which sends me to another chapter on how to remove the seat (What?  You turn the key, the seat pops off!  Easier to do it than to search for the required section.)  By the time I finish each section, I forget where I came from, so have to start reading all over again. My solution was to use tabs to mark my pages in the shop manual, so that I could flip around more quickly.

The reason I was reading the shop manual was to find out if I wanted to do a valve adjustment myself or not.  I don't want to do it if it is going to be like the BMW K1100LT, where both camshafts had to come out, and had 3 special tools.  Or the Honda CBX (24 valves) where the manual said to drop the engine before removing the valve covers, and I also needed one special tool to pry out the shims.  I did a valve adjustment on each of those bikes, but I wouldn't want to do something as complicated on the Vulcan.

To my surprise, there were no surprises in the shop manual on adjusting the valves.  Basically, - remove the tank - remove the valve covers, remove the side cover to see the crank nut and timing marks, turn the engine so that your valves are loose, measure the clearance.  So far very standard stuff, but now we come to a tricky part, because if the valves need adjusting, the old shims have to come out and new ones go in of a different thickness.  With the Vulcan it is apparently very easy!  Slide the rockers to the side with your fingers, pull out the shims!  Then I still would need to drive to the Kawasaki dealer and hope to trade the old shims in on some other shims of the correct thickness, or buy some new ones.

If I am too lazy to do this valve inspection/adjustment job myself, I am a heretic to the DIY religion.

Posted by Lost Motorcyclist at 3:54 PM