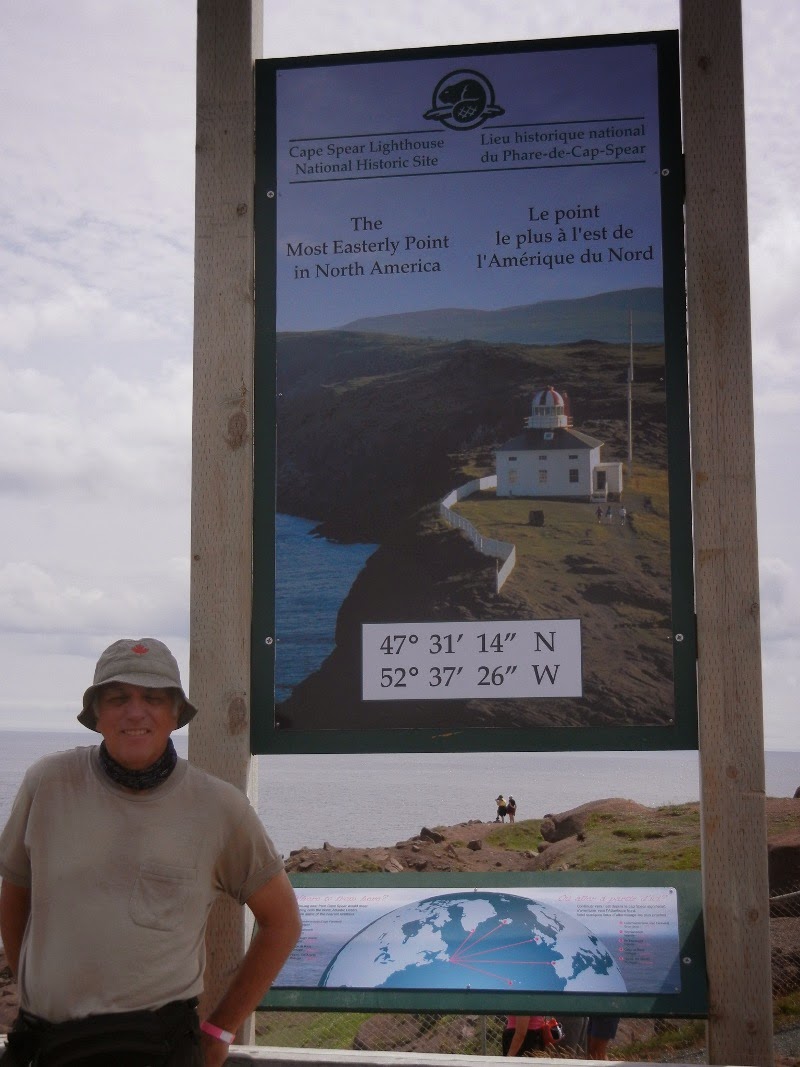 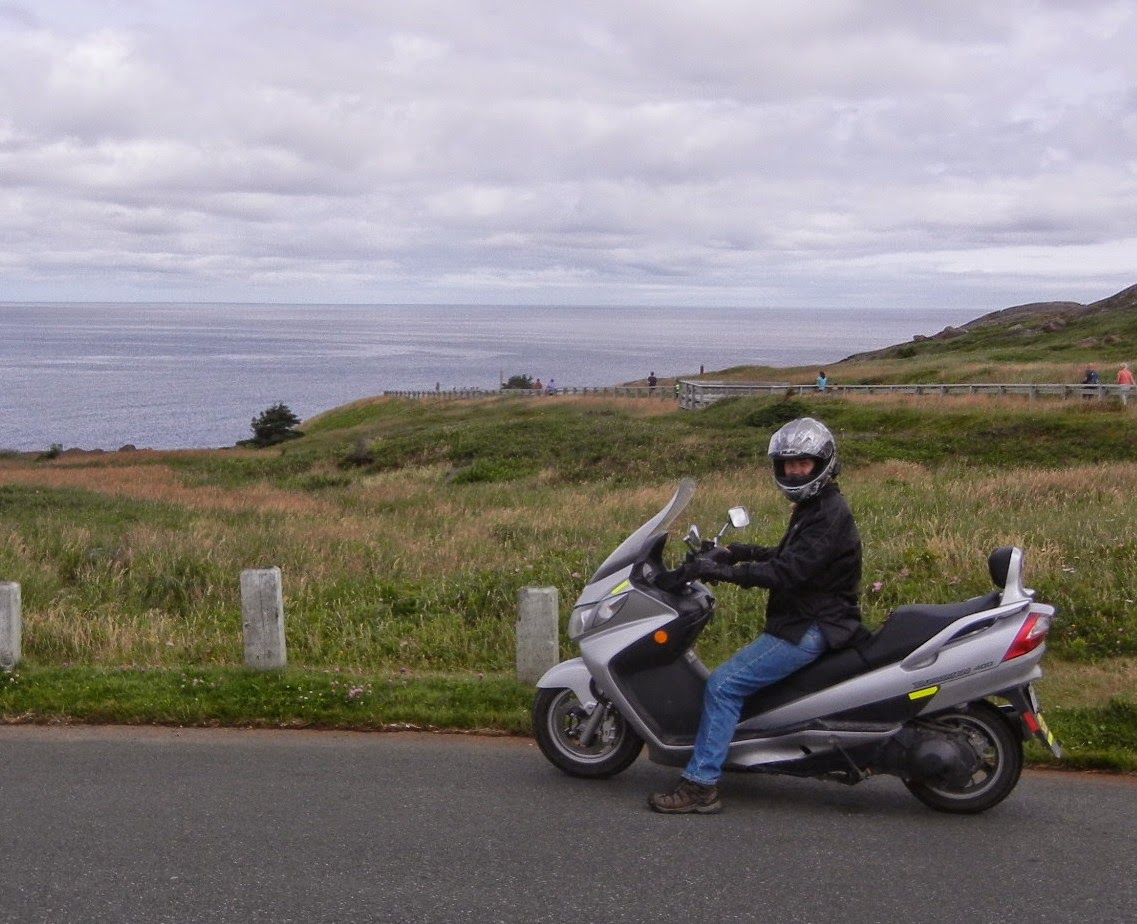 We chose the Comfort Inn, in the central part of town, so we could walk around town easily.

The day started cool and foggy, but now it's not as cold, and the sun peeks through the clouds once in a while.

Posted by Lost Motorcyclist at 4:41 PM No comments:

We are not home yet, but staying at the Motel des Deux Lacs, 2 km from the Quebec town of Waterloo. It rained most of the day, but we stayed warm and dry in our rain suits.

I took no pictures because of the rain, but I wish I had one of the main street in Thetford Mines, where we stopped at Chez Mes Roses for lunch. The street was closed for a festival and a band was playing, but nobody was there except us in our space suits.

Posted by Lost Motorcyclist at 11:37 PM No comments:

We stopped here at the Wigwam Motel, a short walk from the old centre of town. There are lots of narrow winding roads, murals, and endless historical plaques for Mary Ann to read. Next we went to Cafe du Coin du Monde. We chose it because it was busy and was centrally located. I got a picture (below), of Mary Ann and the bottle of cider she ordered. 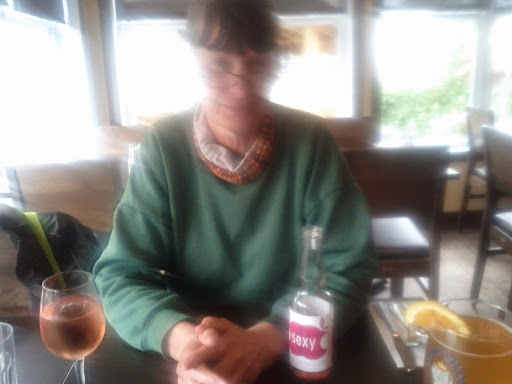 Posted by Lost Motorcyclist at 9:25 PM No comments:

When we woke up this morning, I was hoping for a nice boring ride through New Brunswick. That did not happen. Mary Ann's childhood dream, apparently, was to drive along the St John river, and today was the day that dream had to come true. Never mind that it was raining all day long. Regardless of the bumpy, wet roads. Despite the advice of a local resident, and the surprise 37 km detour just at the end of the day.

We arrived at the Leo Motel in Grand Falls  looking very wet, at the rainiest part of the day. The lady at the desk took pity on us and lent us the motel owner's Toyota Corolla to drive into town for supper.

Picture: Mary Ann calls dibs on driving The Corolla home to the motel, whose motto is: "You're only a stranger once". So true. 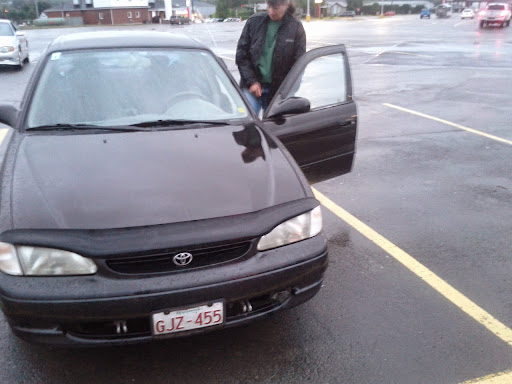 Posted by Lost Motorcyclist at 8:26 PM No comments:

We have a cabin for the overnight ferry ride to Nova Scotia. It has its own bathroom with a shower, two bunk beds, a porthole, writing desk and chair, pillows, towels, soap, lots of lights, curtains, and two card-keys for the door. The only irritant is that all three AC outlets in the room are dead. To recharge the smartphone, I have to sit in the bar or the lounge, where it's still tricky to find a good spot even at 3 AM.

Speaking of good and bad, this is where you would normally reflect on the trip itself. This trip, more than any other motorcycle trip I've been on, had forced me to rethink motorcycle trips. And not just because Mary Ann often wears a T-shirt that says RETHINK. In the end, I have a new appreciation of why I like  motorcycling, and of the difficulties (or, as they say, challenges) of motorcycling.

On this trip, we had lots of rain and fog. The most scenic roads were littered with dangerous potholes. We needed to pre book the ferry and wait for the booking date, even though normally motorcycles can fit anywhere. I also had some age related health issues, on my first trip as a senior citizen.

But despite the downside, and defying logic, I think the motorcycles still made the trip worthwhile. Because of the motorcycle and scooter, we met some very interesting  people, and have more stories and memories that I could not imagine having with a car.

So to summarize without all the details, the more difficult, or unusual the mode of transport, the more interesting the trip. Not everyone will understand, but after this trip, I think I might be getting there.

Before I forget, last night we were in the bar lounge talking to some other travellers, including Michael, who was the singer (as I mentioned before, this is more like a cruise than a ferry ride). Michael plays the guitar, sings local folk songs, tells a few stories, and generally provides the entertainment. He gave Mary Ann a mention during his performance, which is maybe the event that just got me thinking about what this trip means to her, and not just what it means to me. It came clearer as I watched her lead all the other motorcycles onto the boat, and then saw her strapping Burgie down for the boat trip. Its not just a cruise, it's an accomplishment. Trips don't all have to be about being  pampered. Just ask the people why they ride bicycles across Canada, or why they walk or run. It also helps you understand what Terry Fox did.

Posted by Lost Motorcyclist at 2:30 AM No comments:

This town reminds us of western towns. Really wide streets. Yesterday visited Hopewell Rocks which are on the Bay of Fundy. Also, Moncton was a nice looking city, that was a surprise for me.

Picture: our cabin on the ferry from Newfoundland. 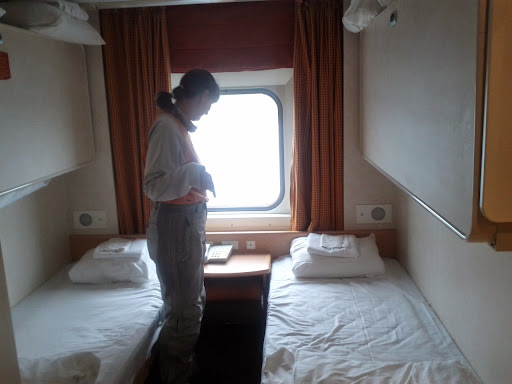 Posted by Lost Motorcyclist at 2:29 AM No comments: