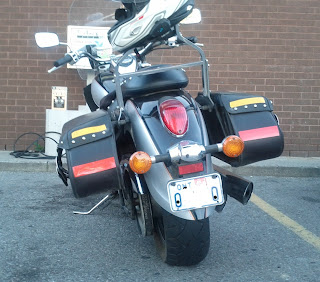 The one big disappointment of our trip, it seems, was the lack of any real breakdown to spice up the story. Coincidentally, today, I was answering an email from a fellow Vulcan 900 owner who followed my trip out west on the blog.  We were discussing the fact that the VN900 does not have tubeless tires, and would be hard to repair on the road.  I replied this morning that I have never had a flat on the Vulcan, or on the three bikes before that, for a total of 330,000 km without a flat tire.  Consequently this afternoon I had a flat tire.

Now I have a breakdown to write about, and although it did not happen on the trip, it almost could have.  It was this close.

The flat tire story starts with me taking the Vulcan out for a ride, of course not checking the tire pressure, and leaving my emergency tire pump at home.  About 4 km from town, I experienced a vague feeling in the steering of the bike, kind of hard to describe, but it felt heavy and I had to use a lot of force on the handlebars to turn.  So I pulled over, and the rear tire was visibly flat.  I decided to drive slowly back 4 km to the last gas station on Homer Watson Blvd, to fill it up at the coin operated air pump.

Next, I rode 2.5 km to the next gas station/air pump at Homer Watson and Pioneer Drive.  The tire was losing air so fast that it was flat again when I reached the next pump, but the bike did not appear to be dangerously out of control.  So I pushed my luck again, filled the tire and drove another 1.5 km to the Esso station on Homer Watson and Manitou.  Thinking I was lucky there were so many gas stations on Homer Watson Blvd - almost as many as the Tim Hortons.  Anyway, here  my luck ran out.  I put a loonie ($1 coin) in the slot, nothing happened.  But right above, under the "Have a nice day" sign was a hand written sign that said "Out of order".  By the time I figured this out, the tire was flat again, and I was thinking it was time for plan B, if I had one.

I took about 10 minutes at the Esso station to come up with another plan. The motorcycle shop was closed, so I settled on loading the Vulcan on my little bike trailer, and bringing it home.  So first I needed to get home to fetch the car and trailer. Mary Ann was not home, but I called one of my sons who lives in town and has a car.  Jon volunteered to come and get me and help me out loading the bike on my trailer.  But my car with the trailer hitch was gone with Mary Ann.  So I told Jon to drop me off and I would call him again if I needed him.

When Mary Ann got home, we connected the trailer to the car and headed back to the Esso station to get the Vulcan.  The main problem was that this trailer was built for a bike of half the weight and smaller dimensions. Also, my trailer is built backwards, so that I need to unhitch the trailer to load the bike.  This works OK for a little bike, which I can actually load single handed. But not sure if the Vulcan would fit, or if it did, could I lift the hitch to put it on the ball.  Luckily a teenage boy and his friend offered to help, so we got the bike loaded and the trailer hooked up to the car, and I was ready to roll away when someone noticed that now the trailer had a flat tire.

There was an electric pump in the back of the car, that Mary Ann had purchased the last time she had a flat with the car.  We have never used this thing until today, and as you might guess, we have still never used it.  The cord was too short to reach the trailer tire, and we all agreed that unhooking the trailer again was not an option.  So the young man volunteered to walk home and bring back a complete air compressor system, which he did, and then we plugged it into an outlet on the outside of the Esso station, which I thought I had a right to use due to the lost $1 coin before I saw the "out of order" sign.  The tubeless trailer tire still would not hold air, as the bead was distorted by the weight of the Vulcan motorcycle.  But jacking up the trailer solved that problem and the bead seated itself.

Next problem (you knew there would be a next problem didn't you?  Or are you not a religious person.)  The car's rear hatch would not close.  So we drove home with the hatch open.  Besides, the Vulcan was so long that the rear tire overhung the bed of the trailer, and the rear fender almost touched the hatch of the car when closed.  But later we found that it actually does not touch, and we probably can drive with the hatch closed.

Finally, we got home and went out for a beer and pizza.  Tomorrow I will call Zdeno's to see if I can get a new tire mounted. 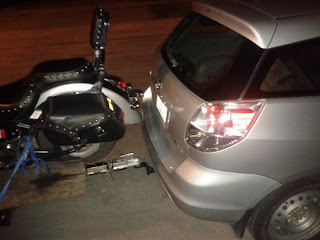 A last note.  I found a fresh chalk mark on the front tire of my bike, which I think means that someone was timing me to see if I parked too long in front of the Esso station "out of order" air pump, with a flat tire.  Even though I had talked to the cashier about their pump being out of order, and my bike being stuck there with a flat tire until I could get a trailer.  Or maybe there's another explanation for the fresh chalk mark right in the centre of the tread of the front tire.
Posted by Lost Motorcyclist at 11:57 PM