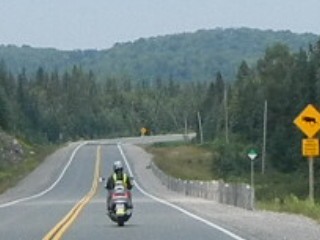 Although the trip is over, I still have a few more comments, this time about gas fillups.  We made 50 stops for gas this summer.  The usual routine was for both of us to park at the same pump.  I got off my bike and put a VISA card in the pump while Mary Ann remained sitting on her bike, removing the Burgman's gas cap.  Once I had the pump working with the correct grade of fuel, I handed the nozzle to Mary Ann, and she refuelled while I removed the gas cap from the Vulcan.  When she was finished, Mary Ann recorded the Burgman's litres, while I continued filling the Vulcan from the same pump without resetting the amount or the grade.  When I finished, I got the receipt, reset my trip odometer, and then both of us were ready to hit the road again.  It was quick, because neither of us had to remove helmets and earplugs, and I didn't need to walk into the store, or line up to pay for gas.

Of course, in 50 stops there would be some variations.  For example, in Powell River, the attendant remotely shut off the pump and ordered Mary Ann to get off the bike.  Apparently it is illegal to refuel a motorcycle while sitting on it, because of fire danger.  We already knew this, because we were told the same thing by a gas station attendant in Rainy River, Ontario.  We ignored the advice, or at least Mary Ann did. Because of the location of the Burgman filler cap, it is much easier to fill up sitting down.  A few times on the trip we actually saw other motorcyclists refueling while sitting on the bike, which is a bit tricky when you are alone, and have to also reach the pump's control panel while sitting on your bike.

Another time, in Washington state, we came across some pumps equipped with rubber boots, like they have in California, to prevent gas vapour from escaping while refueling.  I handed the nozzle to Mary Ann, and she exclaimed, "What's this?".  She tried to fit it onto the Burgman, but no luck.  So I suggested she just hold the rubber boot up and refuel as usual.  It kind of defeats the purpose of the boot, but what else can you do?  It was the only pump we encountered with a boot on the whole trip.

Another time we were out on a remote highway in North Dakota, hoping to find a town with a gas station soon.  We stopped at the first station we saw in a little town, even though it looked weird.  Actually, by weird, I mean it looked exactly like stations used to look sixty years ago.  No overhead canopy, no instant pay at the pump, and an attendant that came out to do the fillup.  I have been caught this way before in some US stations where the "full service" costs 10 cents more per gallon than the "self service".  I know its not a lot of money, but the principle of making me pay more when I put my own gas in anyway is annoying.  So I checked the other pumps, marked "Self Service" and saw that they did indeed have a lower price per gallon.  So I got back on the bike and was trying to push it over to the cheaper pumps, when the attendant said "Don't bother with those pumps, we'll give you the self service price at this pump."  So we filled up at the expensive pump, then when I paid the bill, they calculated a discount and gave me the self service price.  OK I admit this story is not terribly interesting, but to people who have to fill up every 250 km, it is riveting.

In Sudbury, we were only a few days from the end of our trip, on the way back.  We pulled into a gas station where there was another rider and his wife or girlfriend on a Harley at the next pump.  He said hello and we were kind of chatting while I went ahead with the refueling routine, without really thinking about what I was doing.  After all, this was the 47th time we refuelled the bikes on this trip, and it was becoming second nature.  But he was watching Mary Ann do the Burgman fillup, and he commented, "Wow she really knows what she's doing."  We never heard a comment like that anywhere else, especially at home in Kitchener, where I see women going to self service stations all the time.  But maybe it was more a reference to the teamwork than just surprise that a woman could fill up her own tank.

Picture: Mary Ann and Burgie in northern Ontario, looking for gas.  I have no pictures of actual gas stations for this trip, because apparently when I am on my own, all my vacation pictures end up being gas stations.  So I compensated this time by avoiding all pictures of gas stations.
Posted by Lost Motorcyclist at 10:19 AM