About Getting the Very Best Equipment 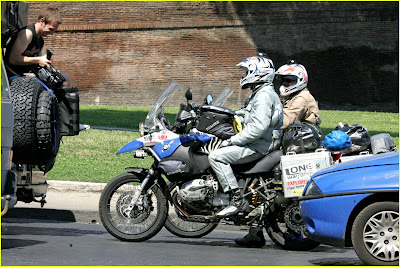 Admittedly, there is a good feeling that you can get by owning the very best.  When you know that you have paid top dollar for a recognized upscale brand.   This feeling happens in motorcycling as often as anything else, and this feeling can be addictive.  However, it can become a treadmill where you are putting out a lot of money for not much extra value.  This can happen where you have already laid out a large sum for a top quality piece of gear, then find out that something better has come along.  To get those few extra little improvements, you need to pay for the whole thing all over again.

I was kind of thinking that last week when I saw that there is a new version of my helmet on the market.  I have a Scorpion EXO1000 helmet. While it is a very good helmet, apparently it is now obsolete.  There is now an EXO1100 helmet, with several improvements.  One significant improvement is the weight - it weighs about 4 ounces less than the EXO1000.  That may actually be the only significant improvement, and it comes with a change of test standards.  While the old EXO1000 was Snell approved, the new one apparently no longer can pass the Snell test, and is now qualified under a different test system, which we are assured is "just as good as Snell".   I'm not too much of a believer in these tests anyway, I figure if it passes DOT it's OK by me.  (Except that the Department of Transport does not actually conduct the tests, it's on an honour system, but oh well what can you do.)  One way the new helmet seems to have shed a bit of weight is by reducing the size of the chinbar.  That may be a good thing or it might not be.

Now to get back to the main idea of this blog, which is, do I shell out another $400 to lose four ounces, or do I save a bit of space in the landfill and keep wearing the scratched and dented 2 year old helmet?  I'm keeping it, but not as is. I reduced its weight by about half an ounce by cutting off the old d-rings that I don't use any more since I bought a quick release catch.  And another half ounce of dirt from our six week summer trip might have come out when I washed the liner in the sink. And a tenth of an ounce by removing the clunky scorpion logo.

As bad as it seems to waste $400 just to have the latest helmet, it can be worse with motorcycles.  Last year's $20,000 motorcycle suddenly becomes unattractive when a new model appears with more power, more cylinders, new colour schemes, bluetooth electronics etc.  The only silver lining is that at least you can sell the old motorcycle, and recoup some losses.  (Helmets are much harder to sell.)

Funny thing is, it's all in your head.  Because if you didn't know that there was this new helmet, or jacket, or motorcycle, you wouldn't feel bad.  The way I play it safe is that I try to avoid being addicted to having the very best.  Instead, I try to get addicted to having the most sensible.  Most of the time, anyway.  I know it doesn't always work, but I start with the big ticket items like a house.  I tell myself this house is sensible, I will save money on a house to buy a kick ass car.  Then when I need to buy a car, I get a sensible Toyota Matrix without an air conditioner, and tell myself that's OK because when it's hot outside I'll be riding my new $30,000 BMW six cylinder touring bike, that I bought with the money saved buying the car.  But when I go to get the bike, instead of the Beemer, I opt for a sensible Kawasaki 900 with windshield and non-lockable saddlebags.  Thinking I will use the money saved for a top quality helmet.  Then instead of getting an Arai for $999.97, I go for a Scorpion EXO1000.  And just when I'm getting those warm fuzzy feelings of having a good quality helmet with all kinds of bells and whistles (even though I don't need them and they weigh a ton), along comes the Scorpion EXO1100.

Now finally I can see why rich people think they need to make $10,000,000 per year just to make ends meet.  I just noticed a very nice jacket and pants combo for motorcycle adventure touring (Hey, that's my type of touring!)  at Crazy Al's in London Ontario.  But then I noticed the price.  Oooops.


Picture: "The Long Way Down" stars Ewan MacGregor and Charley Boorman with all their expensive stuff.  (Arai helmet, Belstaff jackets, BMW adventure touring bike, and much more.  Even their neck scarves are about $25)  It's great to be a movie star.  And even better, when they get some of that stuff for free because the movie (titled "The Long Way Down") that they are filming about the trip will help other people decide to buy the same helmets, jackets, or gloves.  I'll bet KTM wished they had provided the bikes for the first trip.  Instead KTM turned down Ewan and Charley, and BMW stepped in to provide the bikes.