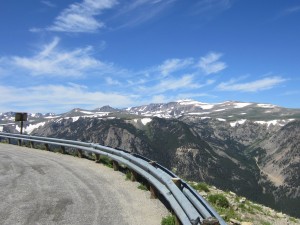 The first time we went to the west coast by motorcycle, we had planned to go through Yellowstone Park.  But somewhere in Montana, at one of my many gas stops, a grizzled old prospector regaled us with tales of tourists in Yellowstone who had been ripped to shreds by Grizzly bears, and we changed our plans.

This summer, Mary Ann wants to visit Yellowstone, and so I will try it again.  I have no illusions about Yellowstone.  I figure it is going to be a few mountains, a few geysers, some bubbling pools of mud, coloured rocks, and a couple of hundred thousand tourists being kept in order by heavily armed swat teams of forest rangers.

Robert Pirsig visited Yellowstone briefly on his journey, told in "Zen and the Art of Motorcycle Maintenance", which is one of my favourite books.  This is what he had to say about Yellowstone.

"Phædrus despised this park without knowing exactly why...because he hadn’t discovered it himself, perhaps, but probably not. Something else. The guided-tour attitude of the rangers angered him. The Bronx Zoo attitudes of the tourists disgusted him even more.Such a difference from the high country all around. It seemed an enormous museum with exhibits carefully manicured to give the illusion of reality, but nicely chained off so that children would not injure them. People entered the park and became polite and cozyand fakey to each other because the atmosphere of the park made them that way. In the entire time he had lived within a hundred miles of it he had visited it only once or twice."


The Beartooth Highway goes into Yellowstone from the North East, and I decided to try this famous road, which Pirsig and his friends followed coming in to the park.  While checking out the road in Google Maps, I noticed a horrendous number of switchbacks, also known as hairpin bends.  I was hoping this road would not be as vertiginous as the "Going to the Sun" highway Mary Ann and I took ten years ago on our most recent motorcycle trip to BC.  I love the scenery and the curves of mountain roads, but I have a fear of heights too, and if the road is too narrow and the dropoffs too steep, and the guard rails are only 6" high, my fear of heights kicks in and I can't really enjoy the ride.  So I did not enjoy the "Going to the Sun" highway at all.  To research this further, I loaded up Google Earth, which lets you "fly" over a 3-D rendition of any place on Earth.  I was shocked by what I saw.  The Beartooth Highway is going to be quite a challenge.  Apparently at the summit the road reaches 11,000 ft. altitude, with high snowbanks on each side even in summer.  It could be cold as well as kind of scary.  But the pavement looks wide, decent guard rails, and only a few sharp dropoffs at the edge.

Generally I have no problem with mountain roads, as I learned to drive in a mountainous area. But in the last thirty years, I have become accustomed to driving on a flat surface in a straight line.  And Mary Ann grew up in this area, and may be a bit unfamiliar with mountain driving, and then to make things worse she is riding a Suzuki Burgman.  It occurs to me that a Burgman 400 may not be ideal mountain road equipment.  Although it has fuel injection to deal with extreme changes in altitude without backfiring, it will probably lose some power in the thin air.  Then coming down the other side, it will have little or no compression braking to relieve the stress on the brakes.

I think my Kawasaki Vulcan will have only a little bit of trouble with the Beartooth highway.  The ground clearance for cornering is limited, and it does not have the climbing power of my old BMW K1100LT, but who needs it when travelling with a 400 cc Burgman?  The Burgman does have a weakness in the mountains.  There is no way to gear down and let the engine do the braking while going downhill.  This may place an excessive burden on the brakes, and then things start to happen.  When the brakes get overheated, they may fail to slow you down, or they may seize up and stop you altogether.

We have never tested the Burgman 400 on a mountain road, so I went to the internet for some information.  Apparently at least one person who lives near Yellowstone has a Burgman 400 and has travelled this highway a few times with no problems.  But just to be on the safe side, what do you do when you are riding a Burgman down a very high mountain?  First, I would suggest stopping at one of the lookouts to check the brakes once in a while.  Don't stick your hand on the calipers right away, you might get a burn. Touch the forks or spokes first and work your way closer to the disk or calipers.  If you can actually touch them without burning yourself, they are doing fine.  If they appear smoking hot - and worse yet if you can smell burning brakes, wait for them to cool off before continuing.  I cannot describe the smell of burning brakes, but you'll remember it when you do.

What else can you do to avoid problems with the brakes?  New brake fluid resists heat better than old brake fluid, because old brake fluid absorbs water, which will boil off in extreme heat, resulting in steam pressure that eventually seizes up your brakes.  New brake fluid in a sealed container should have no water content, and that would be best for the Beartooth Pass.  Mary Ann's brake fluid is already past its due date, so that will be replaced.  Also the brake pads will be replaced at the same time.  Any other tips for the ride down the mountain?  Here is one that separates the Hill Billys from the Flat Earthers: don't drag your brakes all the way down.  Going excessively slowly will actually put more heat into the brakes than letting the bike pick up speed on the straight parts.  I have no proof of this, but I do know that the slower you go, the less that air resistance can help slow the vehicle.  So release the brakes on the long straights, let it pick up some speed (without actually touching the gas), and brake early for the next curve.

The next tip may require some experience, but it helps conserve the brakes when you can negotiate the curves at a higher rate of speed.  If you need to slow down to 2 mph for every hairpin bend, you will be heating up the brakes faster.


Picture: From this website, which has a nice enough 3:45 minute video.  The road is specatular without necessarily scaring the crap out of you.  http://www.ridestopngo.com/usa/beartooth-pass-motorcycle/

Posted by Lost Motorcyclist at 6:55 PM