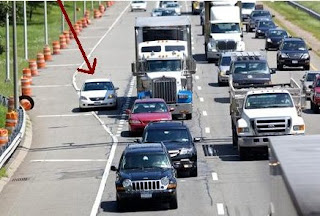 This entry is not strictly about planning for this trip. But if I could read the minds of other drivers on the road, I may never want to drive again.  Recently, the Kitchener Record ran an article about "Late Merging", and the comments it attracted gave a peek inside the mind of some local drivers, including some potential road ragers.

The comments range from sensible to outrageous.

I hate getting stuck in traffic queues while motorcycling.  When the car drivers are lounging in air conditioned comfort, talking on the phone, and creeping along with their automatic transmissions at speeds too slow for a motorcycle, I am either overheated, or freezing.  I'm balancing 800 pounds of machinery, working my clutch hand until it cramps up.  On the other hand, I can merge in anywhere with my bike, and can go around almost any obstacle, so I am very tempted to take the quick way out and leave the car drivers steaming in anger while they paradoxically lounge comfortably yakking on the phone.  After all, I did not cause this traffic jam, and if everyone was on a motorcycle, the problem would not even exist, because two motorcycle lanes could fit in one car sized lane.

The deal is that in early merging, warning signs are placed three kilometers before the end of the lane.  While this will encourage people to merge early, unfortunately it can result in stopped traffic queues up to a mile long before the lane actually ends, while the ending lane is almost empty for the same distance,  and some drivers to race down the clear lane, passing hundreds of cars to claim a place at the head of the line.

My question is, must you really merge as soon as you see an arrow warning of a lane closure ahead? If so, which car do you merge in in front of?  I have seen lineups that stretched back to well before the first warning sign.  By the time I see the first warning sign, the "open" lane is already completely stopped.  So where am I going to merge in?  Do I have to come to a screeching halt in an open lane just because I saw a merge arrow, or am I allowed to keep moving until I find a place I can safely merge in? If I stop arbitrarily with my motorcycle, I could be killed in a rear end collision with a car.

There should be no need for road rage on this subject, as studies are being done and eventually new traffic control methods will be developed.  Here is an academic study of these strategies without the rhetoric.  You can google it to find the .pdf file if you wish.

Late merging: (i.e wait till the end of the lane to merge, and "alternate" entering the constriction) pro: Shorter queues, fewer sideswipes, less aggressive driving. Con: Hazardous during low volumes where drivers come upon the lane closure at high speed with little warning.  Drivers often do not comply with the requirement of alternating.

http://angryrantdotcom.wordpress.com/2011/08/01/5-rules-to-follow-when-driving-near-me/
Posted by Lost Motorcyclist at 9:51 AM