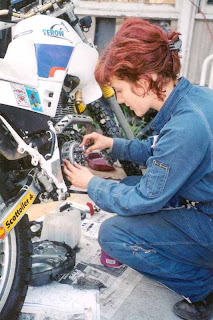 I was at the Canadian Vintage Motorcycle Group rally in Paris a few days ago, and one of my finds was a book called "Lois on the Loose", by Lois Pryce. It is about Lois giving up her job and taking a motorcycle trip from Alaska to Ushuaia at the southern tip of South America.

Well, Mary Ann was a little disturbed that I read the book before she did, and called it a fake present for myself.  But no, really I wanted it for her because we are only about three weeks from going and she is still saying five months is over-preparing. In a way, I see her point.  I am possibly better organized for this trip than I am in real life.  Example - I have checked to make sure that all my clothes for the trip fit in my luggage.  I have not checked that all my clothes for real life fit in my closet (they don't, actually).  Maybe that's one reason I like travelling.

Well, since I've read the book now, I will do a book review.  After I finished the book, which I really enjoyed, I found Lois Pryce's website where she has some extra pictures and information.  At that point I came to realize something that had not struck me while reading the book.  Lois was actually quite well prepared for the trip, I might add, even better prepared than I am for my trip.  She didn't really cover the details of the preparation in the book, but that is simply because she wanted to write a good story, one that people might like to actually read.  Whereas I am just writing about anything that comes up, and likely some of it is boring.  So not only does she prepare better than me, but by not writing about all of it, she also writes better than me.

One reason I think Lois was well prepared is in her choice of a motorcycle.  Although she often mentions in the book that everybody puts down her bike for being too small, (a Yamaha Serow 225cc), I think that most experienced motorcyclists would probably agree on second thought that it was actually a good choice - a little unusual perhaps, but given the route and the size of the rider, it was an intelligent balance of size, carrying capacity, speed, reliability, and on-the-road repairability.  Lois' previous bikes were a  1959 BSA Bantam D7, a 175cc 2-stroke; followed by a 1963  BSA A65 Star, a 650 twin.  For someone with that history of motorcycles, choosing the Yamaha Serow borders on genius.  I hope I'm not spoiling anything here, but even when I first read about her choice of a bike, I did not think it was stupid at all.  And I still enjoyed the story.

Mary Ann asked me if I thought the book was realistic or if it was just exaggerated to make a great story.  Never having done most of the things that Lois did, I can't really say. But I don't think she exaggerated, it was more like she maybe selected what things to leave out.
Lois had a self deprecating sense of humour, and so it suited the character development to downplay her own strengths and some of the humour came from making fun of her own weaknesses.  And that's one reason why her book is funny and an interesting story, too.

So I guess my only criticism of the book would be that at first I was fooled into thinking that Lois was in way over her head, but actually, far from feeling sorry for her, maybe she is a better motorcycle traveller than me.

Picture: From Lois's website, she is changing the clutch.  Another thing I have not yet done, may never do.

Posted by Lost Motorcyclist at 7:59 AM