Which Jacket Should I take? 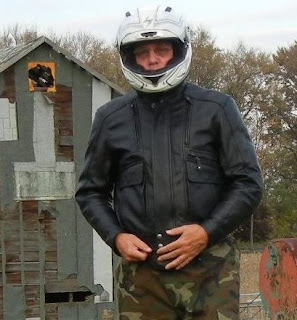 According to "Hitchhikers's Guide to the Galaxy", the most important item to take no matter where you go, is a towel.  But I am thinking the most important item on a motorcycle trip might be the jacket.  On my first few long trips, the jacket was an afterthought, a flimsy nylon shell not designed for motorcycling.  Somewhere in Manitoba I met another young guy riding a motorcycle across the country, and he was shivering in just a t-shirt.  That was all he brought.  Made me feel like a genius for bringing my nylon windbreaker and a sweat shirt.  (and a windshield on the motorcycle, which he didn't have either)

Since then I have had quite a few motorcycle jackets, and right now I have two that I like best.  One I call a "Dakar" style, meaning it is a 3/4 length.  It is the Commander, made by Scorpion, and in high visibility colour.  It is a textile jacket, with vents, zippers and pockets everywhere.  The other is a heavy leather bomber jacket, also with pockets, vents, zippers and liners.

Which is better, the traditional black leather motorcycle jacket or a modern high-tech and high visibility (flourescent lemon/lime neon glow) with reflective patches?  It is just too much to take two heavy jackets, so lets look at the pros and cons. 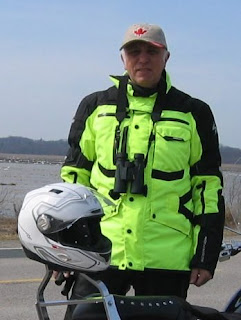 The hi-viz jacket's appearance is too extreme for normal walking down the street or into a cafe. Heck, it's almost too much for riding a motorcycle down the 401. The black leather jacket, from what I see in public, now has become fashionable, at least in Ontario.

However, the high viz jacket is more visible than the black leather, so the series is tied at one point each.

One of the best features of the black jacket is that it shows very little dirt. My one big disappointment with the hi-viz is that it not only shows dirt, it projects the dirt directly on your retina, and the dirt is difficult if not impossible to remove.  I have had the jacket since March 2010, and it has been in the washing machine once, in January 2011.  At that time it almost came clean again.  But since then I have accumulated even more road grime, and when I threw it in yesterday, it came out still looking dirty and old.

How do you get an old hi-viz jacket clean again? I did a little research on the internet, and came up with nothing that I didn't know already.  The consensus seemed to be "just live with it.  It will not look new again."  But actually, there was a better way, and in fact it is sort of suggested in my washing machine manual.  You have to put some liquid dish soap on the dirtiest places, and let it soak in first.  The after a half a day or so of soaking, throw the jacket in the washing machine.  Well of course I didn't read that until I was ready to put the jacket in the washing machine, but I came up with something a little different myself.  I sprayed some "Fantastic" on the dirty parts, and rubbed it with an old tooth brush.  Then I mopped up the excess and repeated until cleaner looking.  The jacket was starting to look good, and Mary Ann suggested spreading dish soap over the dirty parts and letting it soak.  So I used both methods, and now I am throwing the coat in the washing machine again.  But it already looks clean enough for me.  It doesn't look new from up close, but get back 10 feet in the sun and you're blinded by the sheer visibilty of the colour, you will never see the remaining dirt.  I should mention that so far I have not seen any fading or colours running despite my abusive treatment.  The material is extremely durable, and the colour is pretty stable too.

So where does that leave me in the decision of which to take?  Just as torn as ever.

Pictures: Which jacket is the high viz?.  Hint: high visibility is easier to see.

Posted by Lost Motorcyclist at 9:20 PM