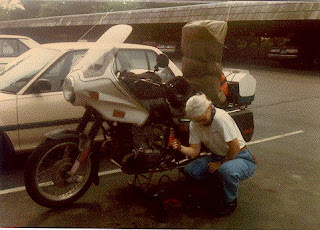 I saw some advice for motorcycle travelling: "Take along a set of jumper cables".

The reason you need jumper cables, is in case the battery is discharged at some time during the trip. You could use the jumper cables (and a good battery) to get the motorcycle started again.

Years ago, motorcycles started more unpredictably, and we used to bump start (or push start) them, or use a kick start lever if equipped, or at times use jumper cables.  Today the batteries are better, and with fuel injection, the bikes seem to start every time, with only a few rotations.  So its tempting to ignore the possibility of no-start scenario while on a trip.

On this trip, the need for jumper cables is twice as likely with two bikes.  And we just happen to have a second bike to jumpstart from. Also, both bikes have batteries over 5 years old. Another reason we may end up with a weak battery is if we use them to charge our electronic devices.  Finally, while the Vulcan is hard to push start, with the Burgman it is simply impossible.  Of course neither bike has a kick start. With fuel injection, I'm not sure kick starting is even possible any more.

There are times you are most likely to need jumper cables.  One is when you go to start the bike in the morning, so in this case you will be in a campsite or at a motel.  Another is if you park your bike during the day, and leave the lights on.  Although you almost never need to recharge the battery on the side of the road, this can happen if your alternator has stopped working, and within a few hours your battery will gradually run down until the bike stops running.

If you are not successful with jumper cables, hopefully you did not botch the jump start so badly that both machines are now fried. If one bike is still good, use the same screwdriver to remove the cables from the bad battery, pull  it out and use the running machine to take it to be replaced or recharged.

Figure out a good place to store the jumper cables. We only need one set of cables, and I will use the Vulcan tool tray.  This tray is empty because I carry all the tools in  more convenient location where I don't have to remove the luggage to get at them. Car cables are simply too large and probably won't work, so I have a set of smaller cables that may or may not work, but at least they fit the space.  It makes sense to put the jumper cables in the underseat tool tray, because if we need them, we will also be needing to access the battery right below the tray.

While I was fiddling around in the garage, I discovered another SAE pigtail plug wiring harness for my motorcycle. It was brand new, the polarity was correct, and even better, it had a cover for the SAE plug so that it would not touch any metal bits, and keep it shiny and clean.  So I removed my old resoldered harness from my previous blog and replaced it with this new one.  That's the fourth new motorcycle part I needed, that I found around the house in the last two weeks, that I didn't even know I had.

Picture: From the Hell's Tunas Motorcycle Club picture gallery http://dcwi.com/~tuna/photo.html
Jump starting a bike, looks like a flashback to the seventies.

Posted by Lost Motorcyclist at 5:05 PM