Lots of New Stickers, a Test Ride at Night 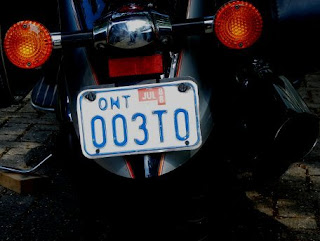 I know that we won't be doing much night riding during the trip to B.C., but I actually enjoy riding at night during the warmer months.  At 10:00 PM it was still 14c, and comfortable with ordinary spring/summer riding gear.

As part of my preparation for the trip, I have new reflective stickers on the trunk and windshield, and bolt on reflectors on the luggage rack.  By turning on the car's headlights, I can see for myself the reflectors will be visible enough to other drivers at night.

My new Kevlar cargo pants feel warmer than ordinary jeans, with three layers on the knees. The second layer is the Kevlar itself and the third layer is the pocket that holds the Kevlar. I am not planning any tests, so I will just assume they also protect against road rash in the areas covered with Kevlar.  There are a few Internet videos of people sliding along with Kevlar motorcycle pants.

The smart phone made itself useful for the first time.  I left Dutton at 9:45 PM without checking the weather station on TV. Within minutes of hitting the 401 I saw a flash of lightning off to my left.  I began to look for a place where I could pull over and put on my rain gear. But because I could see a few stars overhead, I continued for about half an hour to the Woodstock service centre, where they have free Wi-fi.  I got out the smart phone, wanting to see the precipitation radar map, and the traffic map for the 401.  I could see a thunderstorm cell over Grand Bend, which explained the lightning I saw while riding near Dutton. Also, the animated weather radar told me that rain would arrive over Kitchener in about three hours, giving me plenty of time to make it back home. And I could also verify that there was no traffic holdup on the 401.  The intel was good, the 401 moved well, and rain started only after I got home and put the bike in the garage.

Only the eastbound "on Route" service centre at Beachville (near Woodstock) has free Wifi.  There is no point in stopping on the shoulder of the westbound lanes to get a signal, because it is too weak to pick up even from the patio of the eastbound On Route. You have to be inside the food court building to get a strong enough signal to be useful.  And don't even think about hopping over the divider barrier and running across three lanes to get free Wifi.

The luggage rack and trunk seem to have made the bike ride a little smoother.  It feels like the centre of pitching motion moved from the gas tank to the back of my seat.  The ride feels much gentler, and my seat of the pants jolt sensor has been very accurate since my operation last summer.

I carry my spare helmet and baseball cap in the Givi trunk all the time now.  When I park, I use it to stow my riding gloves, ear plugs, and neckerchief.  To make sure I don't forget the key in the trunk lock, I put the Givi Key on the motorcycle key's chain.  But next time I'll have to remember to not leave the whole key chain in the trunk lock when I walk into the On Route restaurant trying to get a better Wifi signal.

Picture: I had to pick up my new sticker for 2012. Before putting it on, I decided to peel off the rather tall stack of old stickers, which revealed a sticker near the bottom from 1988.  I first got this plate for my old Honda CBX and I transferred it to my BMW for the next 15 years before it found its way to the Vulcan.  The cylinder count progression so far is 6, 4, and 2.  Playing the numbers game, the next bike is obviously zero.  Either this is the last time I use this plate, or the next bike will be a "Zero" (this is an actual motorcycle with literally zero cylinders for about $10,000)

Posted by Lost Motorcyclist at 10:55 PM