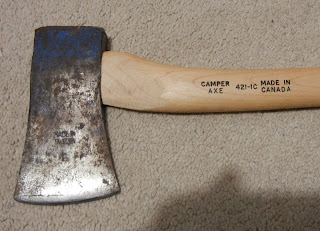 Before I start this blog, I have a request by one of my readers for a "short version" so that she does not need to wade though the entire long winded affair.  So here it is.

I fixed my old hatchet to take it on this trip. I prefer that to buying a $8.00 Wal-Mart special, or a $100 Gransfors-Bruks from Sweden, or a high-tech tactical survival knife/axe/compass/saw/inclinometer.

There: 36 words or less, if you count Gransfors-Bruks as one word.

Now for the long version for readers with high speed Internet access and some time to kill.

On the first three or four cross country camping trips, I took along a hatchet.  It had two uses, the back end to pound in tent pegs, and the cutting edge to split or cut wood for fires. On those first trips back in the seventies, I actually camped most nights and avoided motels. Later on, my camping became more occasional, and so I reduced my camping gear. I still wanted the tent, mattress and sleeping bag, but the campfires did not seem so necessary any more.  So I replaced the hatchet with a small cheap hammer and didn't make any more fires.

So for this trip to the west coast, the hatchet is up for reconsideration.  On a 6 week trip in the summer, there should be plenty of opportunities for camping. And with Mary Ann riding her own bike, I have more leeway in bringing a few extra items as long as they are not too bulky. Among the extras we are bringing are two camp chairs, and I can't think of a better use for a camp chair than sitting in front of a fire.

My old hatchet that dates back to my very first trip, was a Swedish model with an 11" wood handle. The handle broke four years ago, and I bought a new wood handle to replace it.  But the new wood handle (made in Canada) didn't fit the hole, so I guess Canadian handles are not made to fit Swedish axe heads.  I kept the old axe and the new handle in a drawer because I don't like to throw things out.

With the trip coming up, I needed to make a decision about the axe.  Mary Ann is leaning towards not having an axe or campfires, but she does want a hammer for the pegs.  I see new hatchets for less than $8, I guess they come from China.  I also see high tech hatchets with fancy designs, with extras such as saws stored in their plastic handles, compasses embedded in the back. The complex designs can include anything you could imagine and a few things you would never think of.  Finally, there are the high end classic traditional axes and hatchets, mostly from Sweden now that cost around a hundred dollars.

While I was puzzling over the choices, I came across a video showing how to stick a new wood handle in an old axe head. Apparently you rarely are able to just stick it in and start chopping.  You need to shave, carve or sand down the wood to fit the blade.  It takes quite a while as you try the axe head again and again, then remove it, see where it jams and whittle or sand it down further until you get it all the way in.

This last idea appealed to me in several ways.  First I get to use the old axe head, and I hate to throw things away. Next, I saw videos of how badly chewed up a cheap axe can get chopping just one piece of wood.  Apparently old axes were made of harder steel than the new cheap ones (makes sense to me).  Third, I like the idea of taking the same axe as I had on my first camping trip, just for old times sake.

Yesterday I spent a couple of hours with an electric drill and sanding disk, and finally got the new "made in Canada" wood handle to fit the Swedish axe head, and now it seems strong enough to last another 30 years.  But those wimpy aluminum wire tent pegs are probably not going to make it through the summer with this thing pounding on them.
Posted by Lost Motorcyclist at 10:17 AM