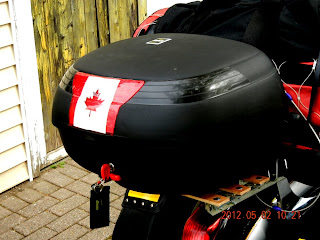 When you are developing a new computer software system, at some time you must declare that you have finished writing the new system, and from then on you try to stabilize the system, test and refine it before implementation.  I think I have now reached that stage with the preparations for the trip.  I have just over two months left to test it and make sure everything works.  The only big jobs left are getting new tires for the Burgman, and a final oil and filter change before we leave.

A last minute addition to the luggage was a two-legged camp chair, the Alight "Monarch".  Then the final preparations for this trip were completed by building a luggage rack for the Vulcan, removing the sissy bar and installing a lockable Givi top case. With the sissy bar removed, I found a place to stow a second camp chair and a similarly shaped tire pump. The last big change was to turn the magnetic tank bag around. It blocked my view of the instruments and the corners poked into my legs, but turning it backwards and repositioning the magnets, it sits much better on a cruiser style gas tank. 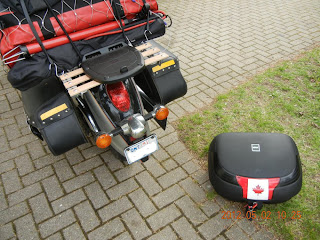 I have left out only a couple of items that were under consideration in the original packing list.  I'm leaving behind my hatchet, which Mary Ann thinks is unnecessary. No need for a spare battery for the camera, as we have a backup camera in the smart phone.  I could not find a good LED brake light kit for the Givi trunk, so I decided to forget about it. Besides, cobbling together a home made job might cause problem on the road.  These days, I am no longer so worried about drivers rear ending me because I carry insufficient rear brake lights.  Now I'm worried more about drivers simply not looking at anything but their Blackberry screens.

So with everything more or less in its final configuration, and fully loaded, I went out for a test ride to Tim Hortons.  The trunk did not fall off.  My BMW lost two trunks in the first year that I had it.  To be fair, I did not test the Givi over one hundred miles per hour.  But then I do not plan on going one hundred mph at any time during our trip out west.  In any case, the warning label inside the Givi trunk says "Not over 120 kph".

On my test ride, I noticed the bike felt more comfortable to ride than when it is in stock form.  The duffel bag acts as a good backrest.  The luggage rack and trunk seem to absorb the worst of the road shocks.  The extra weight is not noticeable even when stopped at a traffic light.

One look at my dirty, overloaded bike, and you would swear that I had just returned from Tierra Del Fuego, instead of the corner Tim Hortons. So when I finished my coffee, I had to struggle with the idea of just taking off and immediately heading for the west coast.  Finally, sanity won out and I turned the bike around.  But I still have an itch to leave soon.

Pictures: You may have noticed a small maple leaf, which I cut out of white reflective tape, and stuck over the non-functional red lens on the Givi trunk.  I prefer it to look like a Canadian flag than to look like a burned out brake light.
Posted by Lost Motorcyclist at 11:29 PM