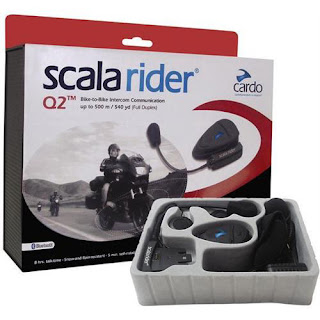 It started this morning, when Mary Ann and I were out birdwatching in the balmy 11c weather with the field naturalists club. We engaged in a conversation with another couple that each rode their own bike on long trips, and found out that they had Bluetooth communicators, and really liked them.  After the conversation, Mary Ann took me aside and said "maybe we will need those for our trip to BC".  Up this now, my standard response would have been, "We go riding to not have to talk to each other", but somehow this comeback was starting to sound really weak.

For the last 5 days my motorcycle has been apart while I installed a new fuel level sensor, new spark plugs, and checked the valve clearances.  I put it back together and was pleased to see that it still ran as well as ever, and now the fuel gauge works.  So with Mary Ann's suggestion in my head, and feeling pretty good in the warm weather, I mysteriously ended up at Zdeno Cycle Parts. I was doomed from the moment Linda saw me and asked if I was looking for something.  10 minutes later I was out the door clutching a brand new Scalarider Q2 Multiset Pro. My sales resistance is pitiful. As she was ringing in the bill, the salesperson mentioned that electronic items are "Not returnable".  A little off putting, but oh well, of course it's going to work, I thought to myself.  This communications device does more than what I need, such as voice syncing with a GPS, voice control of a  cell phone, and running a wireless mp3 player.  It can also tune in local FM stations.  I do like the fact that it does not need wires to plug into the bike.  It is all self contained in the helmet, and runs for (I'm told) 7 hours of continuous talking before needing a recharge, and has a range of about 700 m.

As with any earth shaking new technology, I ran through a series of mental highs and lows as I discovered what it would and would not do, and tried to get it to do what I wanted it to.  I first began to charge the two units for five hours, as instructed by the manual.  While that was going on, I began to install the microphones and speakers in my Scorpion EXO1000 helmet and the counterpart in Mary Ann's HJC helmet.

First problem was that apparently it would not fit on my helmet, which has some stuff in it that I don't use anyway, for example the inflatable cheek pads.  But I got out a knife, I pulled insides out of the helmet and started carving a bit of space for the clamp.  This device is supposed to clamp on to the lower edge of the left side of the helmet.  After my knife work, I got the helmet and microphone and speakers all together and it actually looked almost professional.  Then I did Mary Ann's HJC, which was actually much easier to install without any cutting required.  I guess her helmet is more "normal".

During the remaining charging time I found out the internet is filled with stories about these things not working right out of the box.  Once the batteries reached full charge, I gave Mary Ann her helmet, and I put mine on and we began yelling to each other in the kitchen. Apparently this Scalarider Q2 Pro is one of those that doesn't work, and so I took both helmets and went back to the basement to re-read the instructions. The only thing I could think of doing was re-synching (or "Pairing").  You have to do a bunch of things which is supposed to result in the red lights going on for two seconds solidly, meaning they can now communicate.  If they fail to Pair up, then the devices "revert to standby mode".  That's what it says in the book, without any further comment - I want to know what do you do next if they don't pair up.  Try again? Send it back to the manufacturer?  So after retrying three time with the same results I registered my purchase on the warranty webpage, and prepared to call the help line. But then decided to try it one more time with Mary Ann in case it really did pair up, but just didn't shine the red lights.

Mary Ann and I went back to yelling at each other with our helmets on and suddenly it started working.  I heard something in the speakers, and so did she.  But it sounds like the first half second of anything you say is dropped.  Maybe that's something to do with the voice activation software.  Also the volume seems to adjust itself - and that probably has something to do with the noise compensation software.  These devices are optimized for a very loud environment, and the louder the road noise, the louder the voices go automatically. Anyway the next thing is a real road test.

Posted by Lost Motorcyclist at 9:33 PM