The Preparations Go On 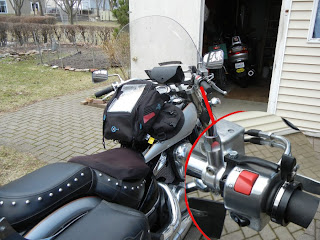 The preparations continue.  My other trips did not take so much preparation, because each trip was an incremental change from the previous.  I may only have needed to buy a few items, and almost everything else could stay the same.  This time is different, because we will be gone for about twice as long as my previous longest trip, also Mary Ann has her own bike, and so I'm planning for the inscrutable Burgman as well as my Kawasaki Vulcan.  Also, I have not been for a long trip since 2004, so even some details like passport renewals need taking care of.  And with the passage of 7 years, technology has changed, so we are sampling some of the new possibilities like bike to bike communications, and wifi internet access.  And I'm older, too, so I need, for example, to take pills along, and a thicker sleeping pad.

I have a very long list of things to do.  Each one should be quick and simple, but it takes time to sort out these purchases, and modifications.  A simple, quick purchase might be something like the new belt drive for the Burgman.  Although it took a week, it was done by the dealer, and worked perfectly when I took it home.  My only remaining problem is how to pack the old drive belt to take as a spare.  Compare that to checking the Kawasaki valves, which took a week, and I did myself, and resulted in an oil leak.  The oil leak then had to be discovered, then fixed, then tested to make sure it was gone.  And the spilled oil needed to be cleaned up.  Altogether two weeks.

We have a Bluetooth rider-to-rider communications system, which still has to be tested on the road from one bike to another.  So far I have installed the units on the helmets, and I have been testing alone on the road with the FM radio only.  The FM radio appeared to not work properly at first.  Two days ago I made a discovery by accident.  I was in Dutton, and driving the 401 back to Kitchener.  As soon as I got on the road, I turned on the radio and it was as clear as a bell at 100 kph.  And it was a Kitchener station, too.  So even with no antenna the FM radio could easily play a station based 135 km away.  I couldn't figure out what the difference was, but by the time I got home I noticed that my right ear was in pain, because the ear/speaker had slipped down out of its pocket.  Curiously, although the speaker slipped down, it was the top of my ear that was pinched.  So that led to the discovery that my ears do not actually sit in the ear pocket of the helmet, they are actually about 3 cm. down from that point.  I moved both the speakers down 3 cm., and the sound was so loud I needed to turn down the volume.

The next day was even warmer and also sunny, and with the bluetooth working well, and the oil leak stopped, I went back to Zdeno's to pick up a few more items from my list.  I wanted a new tank bag, because my old one, which I bought for a non-cruiser style bike, is too big, and not magnetic, and blocks my view of the tank-mounted speedometer. I also wanted a Vista Cruise throttle lock, even though it looks like the thing is too complicated to ever work.  And I also wanted a large size leather tool bag, and I will figure out where to put it later.

At Zdeno's, I was allowed to take out the tank bag to try it on the bike before buying, so I took three small bags out, and picked the largest of the three, an oddly named Oxford "First Time Tank 'n Tail Bag" . At home, I loaded it up with all the stuff I need on the road, like water bottles, locks and a squirt bottle of windshield cleaner.  Unfortunately the windshield cleaner emptied itself out inside the new bag.  So I removed the contents, mopped up the soapy mess, and tried to unzip the bottom flap, which jammed. With my slippery fingers, it was just getting worse so I stopped and Googled "fixing zippers", which I then refined to "fixing separating zippers" (the type we use on jackets).  A nice video came on with a woman showing how to remove the track stops, take the zipper apart, realign it and replace the track stops.  Although my zipper was much smaller and therefore hard to work with, I managed to fix it using her advice.  So now that means today we no longer need "Zen" for motorcycle maintenance.  We need "Google".

I also installed the Vista Cruise throttle lock.  As part of this installation I replaced the stock mirrors that I had taken off four years ago, but the stock mirrors are much better than the aftermarket replacements for clarity and field of view. With everything back to stock, the Vista Cruise went on fairly easily, as long as you do it according to the instructions, plus a few tips from the internet. Vista Cruise people did not include the required allen key wrenches in their kit, and being made in the USA, it did not take metric allen keys.  (Correction: I did not see the wrenches in the kit until a week later. My mistake.)  I went to the nearby Dollarama and picked up a set of SAE allen keys for ... yes... one dollar (plus tax). Then everything went together quickly and seems to work.  But a road test is still needed.  Driveway checks just cannot come close to reproducing the conditions on the road, although they are a reasonable start.

I'm guessing that I'm about 90% done with the planning for this trip, not including care of the house while we're away.