Went for a Test Drive, Where Did the Puddle of Oil Come From? 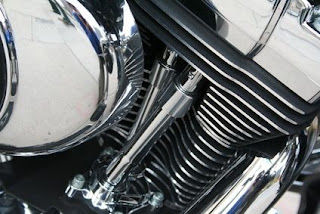 With the recent work I have done to the bike, I was happy to get a test ride to Brantford today.

I pulled the Vulcan out of the garage,  and as I was going down the driveway I could already hear the music coming through the bluetooth headset.  But as I left town, and picked up speed, it seemed that the FM radio was not able to generate enough decibels to overcome the wind sound (and my earplugs too).  So naturally, I reached for the volume control, and tapped "UP" a few times, and the volume went up, but that only lasted about two seconds and it went down again.  Because this headset boasts that it automatically adjusts the volume itself to compensate for road noise, I started to wonder if this was a bug in the volume compensation logic.  I tried it many times, always with the same result.  Then I tried to tap the "DOWN" volume button, with the same result, that the volume went up momentarily.  Finally I decided to turn the unit off, and surprisingly, reaching for the off button also raised the sound level a bit before it went off.

Much later I came up with a theory to explain all this strange behaviour.  My hand must be acting as some kind of antenna boosting the radio reception.  With my hand on the handlebars, the reception diminishes, and so does the volume.  I have no proof of this yet, but as a scientific theory, at least it explains what is happening.

After the meeting at Timmy's in Brantford, I noticed a puddle of oil under the bike, which I ignored as my Vulcan is not made by Harley, and because many clapped-out vehicles park at Tim's.  But when I was putting the bike in the garage at home, I saw another puddle and became suspicious and then alarmed.  This bike has never leaked a drop of oil.  I checked the bike, and it seemed that the leak was not coming from the valve cover area, it seemed to start about half way down the cylinders, and there was enough oil to spatter the saddlebags too. It wasn't too long before I found a plausible explanation on the internet.  There is a tube around the spark plug hole that fits into the valve cover.  Apparently if you do not install the tube correctly when replacing the valve covers, you will get an engine oil leak around the spark plugs.  These tubes are critical in keeping oil inside the engine, I didn't realize that when I put the covers on.  Furthermore, Kawasaki has thoughtfully made a drain hole near the spark plug, in case water (or oil I suppose) gets in there, and that drain hole exits about half way down the cylinder.

Neither of my theories have been tested yet, but tomorrow I will have time to remove the gas tank again, along with the rear valve cover, as oil seems to only be coming off the rear cylinder - and the rear cylinder was where I had a lot of trouble forcing the spark plug tube in  to its seat.

The Vulcan's clock was also wrong, but not because of daylight saving to change last night, it's because I took the tank off, and of course the tank- mounted clock lost its power. So two things will need further looking at.  One thing that will need no further looking at is the living room VCR.  I tried to set the clock on it this morning for daylight saving time, and ended up tossing the whole VCR and its remote into the garbage ( actually our electronic pile destined for recycling).  I will deal with the motorcycle clock after I'm sure there are no more oil leaks.

At least there is one thing that still seems to work perfectly is the motorcycle's new fuel gauge.  After a fill up and 120 km, it's reading about 3/4 full.

Picture: That is not my Vulcan, it is a picture of a bike that's supposed to leak oil.  I see no oil in that pic, yet my bike has oil all over it.
Posted by Lost Motorcyclist at 11:25 PM