Getting Ready for the Grizzlies 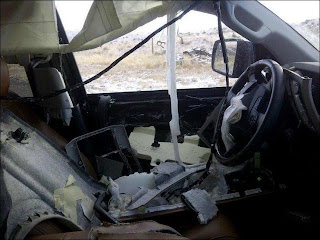 Of all the ways to die I think I would most prefer not to be eaten by a Grizzly bear.  This morning the CBC news showed a bit of an online documentary about Grizzly bears.  It is only available online because it is interactive.  It was made with the assistance of the National Film Board (of Canada).

I watched it, and I can see why it would win awards. It helped prepare me for the trip because we are going to be crossing Grizzly bear country a few times.

Grizzlies live mainly in the Rockies I think, but even though I have crossed the Rockies maybe 10 times, I have never seen one except in a zoo in Penticton.  Actually, that was a "safari park", and probably is not there any more.  In this "park", the animals were kept in by chain link fences.  The Grizzly charged us humans who were standing outside the fence watching, and we all ran away.  I don't think any of us trusted the fence to hold when the Grizzly rose up and grabbed hold of the fence and shook it. I would estimate, the one I saw was 12 feet tall.  But it says on the Internet that a Grizzly appears to a human to be about twice the height it really is.  So maybe the bear was really only 6 feet tall.  In that case I don't want to meet the tallest Grizzly ever recorded, which was 12 feet tall, and I guess would have looked about 24 feet tall.

From watching the documentary, I would guess that it is very important not to surprise a Grizzly with cubs.  Because they may charge you even if you are on a motorcycle.  So when we go through Yellowstone park on our motorcycles, I am going to take advantage of the hundreds of free mobile Grizzly bear deflectors called Winnebagos.  You just follow one of these deflectors down the road, and it will clear the road of Grizzlies for you.

Posted by Lost Motorcyclist at 8:13 AM