Picture: The Sylvia Hotel, covered in ivy. We'll stay a couple of nights. It has all the stuff I need. Wi-Fi, secure underground parking, two TV'S, across the street from the beach, bicycle rentals, Stanley Park. Originally I planned to get a place far from the city and take the train. But since our stay in Winnipeg, I have gained an appreciation for some of the older hotels. A BMW rider we met in Lillooet suggested the English Bay Apartments. But when I phoned they had no vacancy. But my Google phone showed the Sylvia nearby, with excellent reviews. So I clicked on phone, they had a room. Then I clicked on directions for the turn by turn instructions. Next thing I knew we were checked in and walking along the sea wall. We had made it to the Pacific in two weeks. 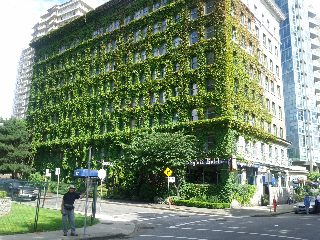 Posted by Lost Motorcyclist at 11:12 PM