Picture of Saint Boniface cathedral, burned in 1968, a new church was built in the ruins.

We have been walking around the city center, it's very pleasant even in this heat. The bikes both seem secure, the parking lot is patrolled by security.

Winnipeg has been great, but some other places were not As good. Thunder Bay had a stretch of construction with a wet slippery base overlaid with large rocks. Burgie nearly fell twice. And a driver pulled out in front of us, requiring a hard application of the brakes. And with all our hi visibility gear and high beams, too. Speaking of hi visibility, some drivers think we are cops, and refuse to pass on the highway until I wave them on. But when it happened on the busy four lane Trans-Canada, I needed a solution, so I tied a rag to the top of my luggage. I figured no cop would ever have a towel flapping around back there, but still some drivers were suspicious. Those Mounties must be very tricky people.

Coming out of Atikokan, we were told that there was a gas station on the road to Fort Francis. But after 40k, and no gas,Mary Ann asked someone, and he said there was no gas until FF. So we had to turn back to Atikokan. Then after going back, I did see some gas pumps in front of a shack at about 50k. I would not have wanted to stop there anyway. 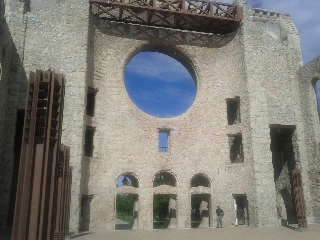 Posted by Lost Motorcyclist at 2:16 PM