This morning, Lost and Burgie both needed oil. So, on the way out of Winnipeg, we stopped for gas and a litre of oil. Each bike took half, and we headed for Gimli via Main St. But before we got out of the city, I was enveloped by a cloud of oil while sitting at a traffic light. It was coming from Burgie. We pulled into a side street to figure out what went wrong. Burgie was missing the oil filler cap. I guessed it was on the ground at the filling station, so I left Mary Ann, and headed back into the traffic. I think I might have missed a traffic light, by the honking I heard, but I found the plug and was back in 45 minutes. Mary Ann was nowhere to be seen. She had disappeared into a house with a vegetable garden outside, so now we had some new friends. I managed to talk and add almost a litre of oil at the same time, and even remembered to screw on the lid. Looking on the bright side, I told Mary Ann this could count as an oil change.

We reached Gimli quite easily, it's only about 90 km. The town is full of people because there is a beach here. So we sat near the beach listening to a live band playing Hank Snow and Buck Owens, drinking ice pop from Robin's Donuts. 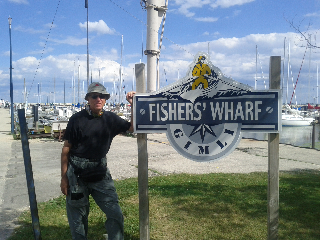 Posted by Lost Motorcyclist at 7:49 PM