We spent the day in North Sydney yesterday, and I picked up a litre of oil at Canadian Tire. I added about a quarter of it to Lost (the Vulcan 900) and Burgie took almost all the rest. The Burgman 400 has always used more oil than the Vulcan so I don't know if I should be worried. Although it also took a big gulp of oil in PEI  , we use Burgie as a taxi when we stay somewhere, and we put maybe 300 km on it in the Magdalen Islands, while Lost was parked. The scooter has done over 4100 km since Kitchener, and has about 50,000 km on the odometer.

It's not just Burgie,Mary Ann and I are having more physical problems on this trip than going west in 2012. After I added the oil yesterday I needed help to stand up, and had a backache all night. At least I got a seniors discount on the cruise ship to Newfoundland. Together, it still adds up to about a thousand dollars return fare. We are getting packed for the trip this afternoon to Argentia.

Picture: I hope this is North Sydney humor, and not what's happening to the place. 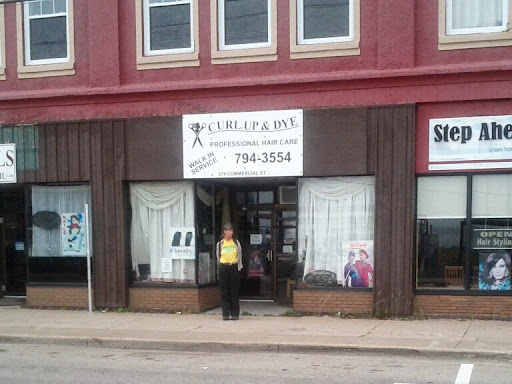 Posted by Lost Motorcyclist at 6:09 AM