It was almost noon before we left "the Dive". (Apparently the affectionate name for Glendive), but we still made it all the way to Bismarck today.

Before I get into all the holdups, or as Mary Ann likes to call them, opportunities to meet people, I feel the need to comment on the Creationist museum. First the good. We got the senior discount. Although the lady at the desk diplomatically told Mary Ann that she didn't look 61, apparently I looked old enough for them to practically pay me to go in. Secondly, they were very friendly, I don't want to say over-friendly, but then where do you draw the line? Third, I was relieved to NOT see any material accusing Darwinists of causing the Nazi Holocaust. But then I didn't see all their material, otherwise we would never have made it to Bismarck today. Anyway, good for them to not make it too obvious.

Now the criticism. I don't want to get into debating the creation vs evolution thing, so criticism is limited to points of order. They had a display of eminent scientists who supported creation. I don't have a problem with that, but most lived before Darwin's time. And one of the handful of others, was a Nazi whose inventions killed thousands of British civilians even after it was obvious the war was lost.

Now on with the trip. We have been trying to follow the old highway 10, the road that got replaced by interstate 94 soon after Pirsig wrote" Zen and the Art of Motorcycle Maintenance". As we were driving along, enjoying the slower pace and character of the road, a road crew flag man (actually a young lady) stepped out to say something. There was a 19 mile long construction area ahead, that required a pilot vehicle. So we had to stop and wait for the pilot vehicle to lead us through. There were no other cars around, it was just us and the flag girl. It was also about 90 degrees F. So while we waited, we tried to stay cool by removing our motorcycle gear, and Mary Ann (you must be able to see this coming) struck up a conversation. We were there for maybe 20 minutes in all, not one other vehicle showed up, other than a construction pickup truck. At one point, the flag girl left Mary Ann with the stop/slow sign, to pop across the road to an ancient Greyhound bus station, to buy a lunch. I was amazed they were still serving lunch! Several other cars drove by, as we were actually in the middle of a village, and the flag girl seemed to know all their names. How long have you been on this job? I wanted to know. " This is my first day".  So are you from around here? No, I'm from South Dakota.

At last, the pilot vehicle arrived leading all the traffic going west, which amounted to exactly zero cars.

Pictures: I took some pictures of our stop, including the flag girl, I wanted to ask her boss to snap the pic of the three of us, but I didn't know him very well and he seemed busy. 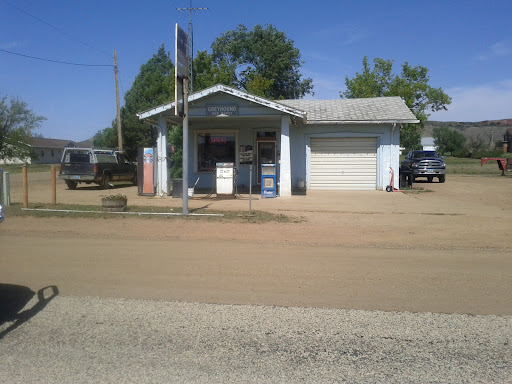 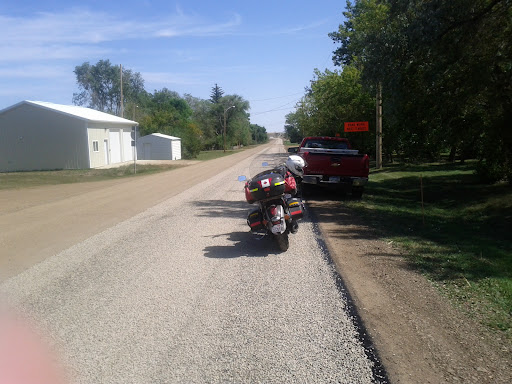 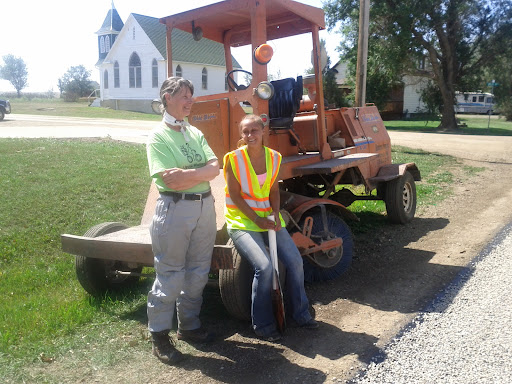 Posted by Lost Motorcyclist at 12:04 AM