TV or no TV

Everyone knows that, when you get a motel or hotel room, you get free TV. I have never seen a motel so cheap that it had no TV. I don't think it's possible to get a discount for a room with no TV. I usually watch it.

When Mary Ann and I go camping, we do not bring a TV. Some campers do. Or should I say  "campers", because I'm not sure the word camping is being used properly for 80% of campers in north America.

Because this trip was going to be six weeks, and Mary Ann dislikes TV, and with many nights in motels, we worked out a solution. I brought along the internet in the form of an Android phone. This arrangement is working out quite well. I have watched almost no TV for 6 weeks.

Recently, I have watched a little TV. One night I checked out all 45 channels, including HBO. There was nothing worth watching, so I turned off instead of my usual behaviour, which is to flip through the channels in an endless loop. I may be getting off TV for good.

Picture: our balcony at the water park hotel in Duluth, watching traffic on I-35 instead of watching TV. Mary Ann had binoculars, so she could watch stuff further away, like the other shore of Lake Superior. 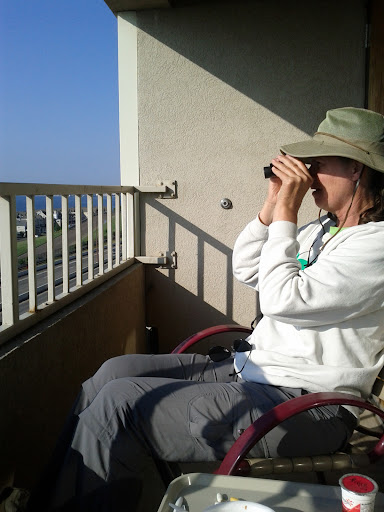 Posted by Lost Motorcyclist at 4:54 PM