Questions about the Burgie 400 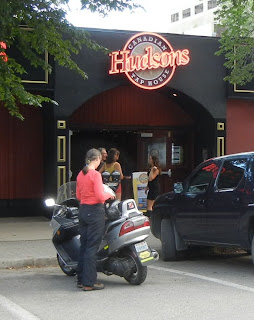 The bikes are too dirty to clean up in one day, so I started by getting the bugs off.  I have tried most of the tricks I read about, but once you get a thick layer of goo, and bake it on for several weeks in the hot sun while adding still more layers, none of the tricks work.  It takes time and elbow grease to scrub off the bugs.

While we were on the trip, several times we ran into grasshoppers on the road.  They sit on the road then jump up just before you get to them.  They have lots of goo in them.  Also, they are big enough to feel like rocks when they hit your legs.  It happens on back roads without much traffic in the west.  So when that happened, I asked Burgie to go in front and clear the road, as it has good leg shields and Mary Ann would not even feel the grasshoppers hitting.  But it did make a mess of the front of  the bikes.

Speaking of good uses for a Burgman.  The picture shows Mary Ann and Burgie parked in front of  Hudsons in Saskatoon, Saskatchewan.  Whenever we wanted to go into a city, and it was too far to walk from where we were staying, usually Burgie got the job.  Comfy seats, (Important after a day of riding!), automatic transmission (Ditto), and room to lock the helmets under the seat. The Burgman was the right tool for that job.

Was the Burgman 400 the right bike for a ride across Canada and the USA? People had lots of questions about the Burgman on the trip.  "Is it comfortable?" "where are the pedals?" "Where do you put you feet?" "How many times have you replaced the engine?" Well, it seemed to suffer no ill effects. and was running just as strong when we got home as it was on the first day.  It climbed all the hills, took all the corners, and managed an overall average of 82.88 MPG (Canadian gallons).  (or 70 mpg US or 3.41 l/100km)  We had to top up the oil a few times and add air to the tires once, but that was also true of the other bike.  It suited Mary Ann just fine.  I offered to get Burgie an Air Hawk seat cushion, but Mary Ann didn't think it was necessary, after trying out mine for a day.

If it was just me, I might want a bike that could go faster.  Although Burgie has a top speed of 140 kph,  for long distances I might prefer a top speed of 180, so that I could cruise reliably at the average speed of traffic out west, where the highest speed limit I saw was 75 mph, or 120 kph.  And that's the posted speed limit, not the average speed of traffic. Also I like to go on freeways. With Burgie  along, I tried to limit our cruising speed to 100 kph.  I think the Vulcan could have managed 120 travelling alone, and there are many sport touring bikes that could comfortably average 160 all week long. But Mary Ann prefers to go slower and avoid the busy highways, and poke around the back roads. For that, and for city traffic, the Burgman was actually more than adequate.

The one weakness of Burgie's might be handling on loose gravel.  Sometimes you get that in construction zones.  My plan to handle that was to go in front and radio back any problem areas (potholes, deep gravel, slippery sections).  But after the first shocker in Thunder Bay, we never had any really bad gravel again on this trip.  And, anyway, most street bikes have a bit of a problem with loose gravel, not just Burgie.

At first I was a bit disappointed with the fact that Burgie's fuel range was less than the Vulcan's.  But it could actually go about 300 km if you wanted to push it until it was running on fumes, and we finally got into a routine of gassing up whenever we found a convenient station after 200 km, and that worked well.  The Vulcan can go up to 350-400 km before running dry, but I usually fill up at 300 when on my own.


Posted by Lost Motorcyclist at 3:49 PM