In this picture, I can't remember which one of the hundreds of geysers hot springs, fumaroles, and mud pots at the park Mary Ann was looking at. But I do remember her talking to that young couple in the background, who told her they were moving from Ohio to Alaska, on the theory that at least it wasn't Ohio.

That was yesterday, and we found a campsite in the park for $12. It must have been one of the least popular places, 17 km from the nearest store or restaurant, at Lewis lake. Just outside the park are abundant accommodations, but a little pricey, e.g. the KOA at $49, priciest campsite yet, and still no decent Wi-Fi. Lewis lake is run by the Department of the Interior, and has no fancy pretences. Pit latrines, no shower, no Wi-Fi, no laundry, no pool. But there was a raised flat pad for the tent, which we didn't use. And it was dark at night which was great for seeing the stars but bad for finding the latrines.

Today we drove to Cook City and took a motel with Wi-Fi (if you walk around hunting the signal source.)

Facts I learned about Yellowstone. It is a giant volcanic crater called a caldera. It moves under the crust of the earth and every few million years erupts, wiping out a whole mountain range. The Beartooth mountains are next. We're going there tomorrow, hopefully at a faster speed than the volcanic area (about 4 cm per year). 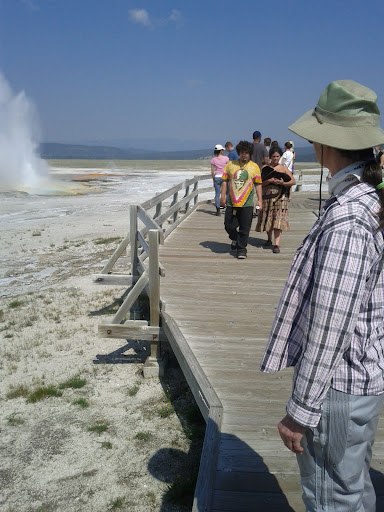 Posted by Lost Motorcyclist at 11:28 PM