I took Burgie into town while Mary Ann was sleeping this morning, and found all this at Safeway. Although we are near the grocery store as the crow flies, there were some problems. A steep cliff separates us from the city, and access points were few. I am unfamiliar with local traffic, for example I found intersections with no signage. And it took a long time to locate those containers of cereal, which double as bowls. Then I found some fresh raspberries, and a small (by Safeway standards) container of milk, and some aspirin for Mary Ann. Unfortunately she was feeling too sick to have anything but the aspirin. Now we're in a
Motel in Coeur D'Alene Idaho, where she can rest, and I can recharge the electronics, and reinstall the weather network app, which died on me yesterday. 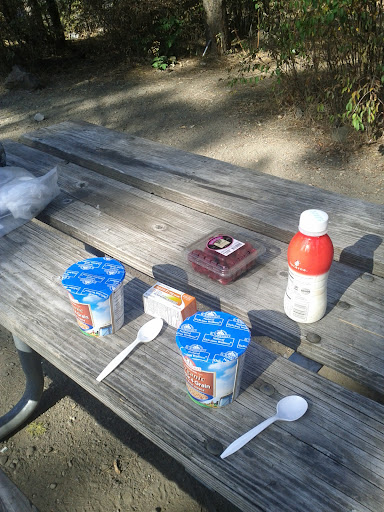 Posted by Lost Motorcyclist at 6:11 PM