There must be easier ways to get into the USA than the Anacortes ferry. By my count, we were officially stopped five times, twice for passports, which apparently require a mandatory "mask" removal, which is how my helmet was referred to. I suppose they were being polite by not referring to it as a burka. And it was the only ferry that wanted to see the boarding pass.

On one stop, all the offloading vehicles were held in a fenced parking lot in the sun for about 40 minutes, and ordered to sit on our  bikes. The sniffer dog was brought in and headed straight for a Volkswagen mini bus. I told Mary Ann over the intercom, that "they never get the smell of drugs out of those things".  I thought nobody but her could hear me, but the woman in front of me turned around and laughed. So now I'm thinking maybe one of the humourless officials could have heard also, and everybody got punished for my harmless joke. Thank God I didn't make a joke about a bomb.

After the release from the ferry, we made it all the way Monroe, WA. We got a motel and I found a T-mobile store which charged me only $50 to set up my phone with a new sim card with an apparently almost unlimited amount of data for a month.

Picture: down load from internet. 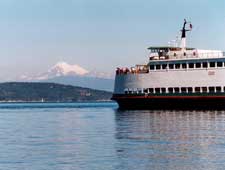 Posted by Lost Motorcyclist at 10:50 PM