This One Is Really About North Bay

The previous blog, while written in North Bay, did not mention anything about North Bay. So I will correct that situation here.

North Bay was home to Mike Harris, a famous right wing conservative Premier of Ontario. Apparently the guy at the motel office is a friend of Mike's. So now I'm back to my own local politics. The desk clerk grumbled loudly about "McGuinty's" tax. I said, to be fair, all premiers had sales tax, it was not [the liberal] McGuinty's fault. "He made it bigger.".

Apparently, McGuinty combined the federal and provincial sales tax into one single tax of the same total value, which means to this person,  he increased the tax.

I understand voting for a friend, but voting for bad math? I don't get it. Has our educational system failed us?

OK I still have not really said anything about North Bay. Here I go.

We ate supper at the Chief Commanda. There is also a Chief Commanda II, a tour boat
The other one is the first boat, which is now a floating restaurant. But are you really floating if you are stuck in solid concrete? Anyway, we went in and sat all alone on the top deck. I felt sorry for the waitress, who had to climb a flight of stairs and walk half the length of the ship every time she needed to come to our table. Mary Ann asked for a glass of milk.  No milk. We ordered the pickerel dinner, advertised on the sign at the street. She returned to inform us they were out of pickerel. We didn't want steak, so she went to get the menus again. Then came back to get our second order. Then we ordered dessert, a banana split which was on the menu. Soon she was back up the stairs,and half the length of the ship again. I said "No ice cream?". No bananas. Amazingly enough, we did enjoy our meal, and not just because it reminded Mary Ann of a four star restaurant in the Ukraine. We liked the food and drink we ended up with, the atmosphere was nice, and the final price less than we are used to.

Pictures: the Chief Commanda I. 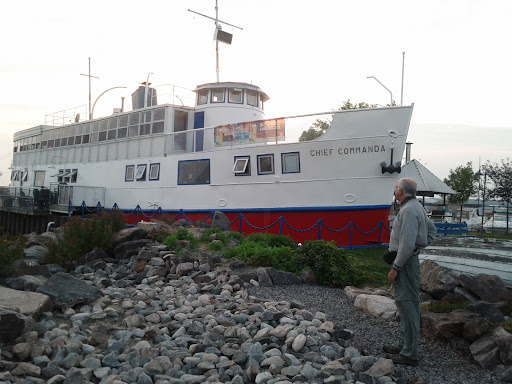 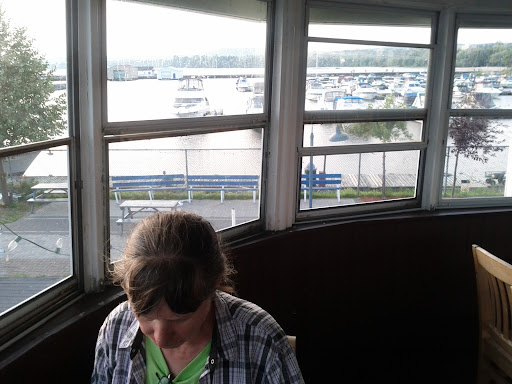 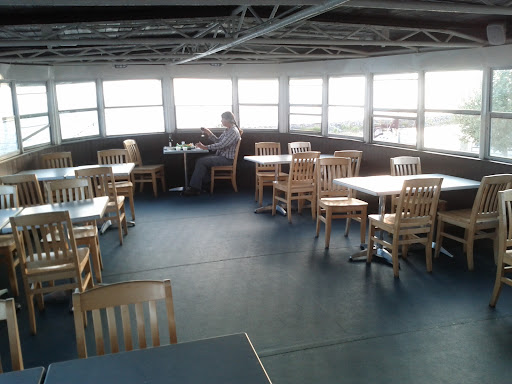 Posted by Lost Motorcyclist at 10:09 PM