Billings was actually quite nice. The KOA tent site was not very private, but sometimes that can be more interesting.

I noticed the site next to us had four Indian teenagers, with no adult supervision. I was a bit worried that they might not be well behaved, but they appeared quiet enough, and a few minutes later the mom and dad appeared. We spent about an hour, and had a chat with the father, who recommended that we go to Glendive, as they have a dinosaur park and a badlands viewing area. Mary Ann believes in recommendations, and so here we are. He also told us he is from a reserve in north central Montana, and Mary Ann was interested in finding out what life was like. Some of it is like our lives, for example languages. He and his wife are from different tribes, and although each can speak their native language, they speak to each other in English. And their kids speak English, but only very little of the mom's language. He is a school custodian/bus driver, but also does a lot of hunting. I asked if his teenage kids went hunting with him, and he said yes, even the girl liked it. They would go by truck, with a trailer for the horses, taking riding and pack horse for the meat. He used bow and arrow, or guns depending on the regulations. He cleaned and cut up the meat, used the pack horse to haul it back to the road, then went to get the truck. Then he butchered most of the meat as hamburgers, because that's what his kids like.  Maybe all this is normal for all hunters, but neither Mary Ann nor I know anything about  hunting, so it was quite interesting.

Picture: in front of a drive in restaurant along the road, a metal statue. 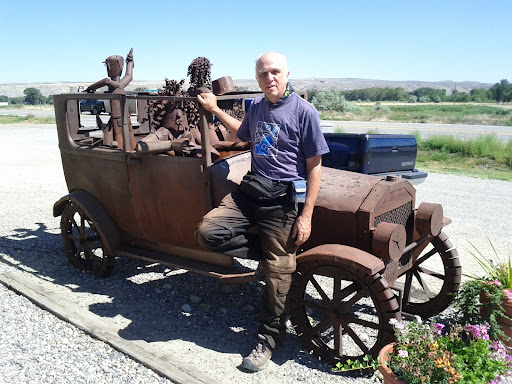 Posted by Lost Motorcyclist at 7:58 PM