Vancouver Fireworks Go Off As Planned

When we heard that there was going to be a fireworks display on Wednesday, we extended our stay at the Sylvia for an extra night. On Monday night we saw people looking at a skunk on the beach in front of the hotel, which is exactly where the fireworks were going to be. The next night we were strolling along in the same area when a skunk walked across the beach path right in front of us, so close we almost stepped on it. Now it is Wednesday, when a crowd of about 400,000 is expected in this area. At about 5:30, we were having a pizza on Denman St., and noticing a steady stream of people carrying chairs and coolers heading in the direction of the beach. The actual fireworks would not begin until 10:00. At 7:30, the police showed up on horses, motorcycles, cars, boats, helicopters, and on foot. They closed Denman and Davies to motorized traffic, while the flow of foot traffic multiplied.

Have you ever wondered what happens when 400,000 people encounter a skunk? Me too. Mary Ann and I found a spot centrally located, and planted our two legged chairs on it. Then we waited, watching the crowd gradually fill up the beach front area, and waiting for the skunk to appear. At first there was no sign of a stampede. However, a woman and her young son came to squeeze in next to us, explaining that they had staked out another spot for two hours, and then spotted a skunk. For the rest of the fireworks show, I had one eye on the crowd sitting on the area to my left. Nothing happened.

The fireworks were mind scrambling. I do not understand why Vancouverites need to smoke pot to enjoy fireworks. I have never seen such spectacular fireworks before. Come to think of it, the sight may have been enhanced by second hand smoke. That may also explain why Mary Ann tried to send me to get a bag of chips in the middle of the show.

Our only disappointment would be that we are leaving tomorrow for Powell River, just days before the Gay Pride Parade. But who knows? Maybe Powell River will have a gay pride parade. We'll just have to ask around when we get there, LOL. (I put LOL for anyone who does not see the humour. If you don't get it I'm not going to Google Powell River for you.) 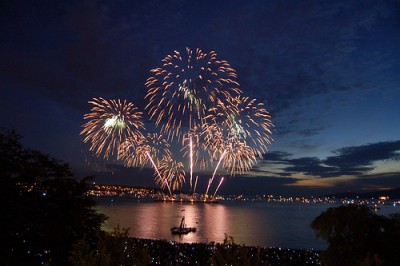 Posted by Lost Motorcyclist at 2:28 AM