Yellowstone park has big animals like Grizzly bears, elk, and bison. The bigger animals are dangerous, particularly to motorcycles. We watched a movie at one of the visitors centres, that helped explain the danger by showing a collection of videos of elk ramming cars, and a bison attacking a young girl. We missed the beginning of the show, so I didn't know if they also had some bear footage. But the facts are that about 100 large animals a year are killed in collisions, and a number of visitors are hurt from trying to approach too close.

Just before we left the park, we encountered bison herds. The cars in front of us stopped in both directions, entirely blocking the narrow, shoulderless road. Then the herd began to slowly cross the road, and I mean really slow, like stopping in the middle of the road, you could only tell they were crossing by waiting ten minutes to see the numbers of bison had increased on one side compared to the other. We were close to the crossing point on our bikes, and having seen videos of what bison can do, we decided to turn back and wait a safe distance away, at a scenic pullout. After about ten minutes, traffic started to flow, so we tried again. The lineup of cars had disappeared, but one bison walked back to the road to nibble on some grass right beside the road. Immediately, two cars stopped, right in front of us, again totally blocking the road, as one was going in each direction. And the bison was right beside them. This time I attempted to force my way through between the stopped cars. The car facing me pulled to the side a little, giving me just enough space to squeeze through. But the car driver going my way had not seen me and started to move forward. So I continued on, keeping the moving car between me and the bison until I got past it, then fell back and resumed following that car. In the end I don't know which is more dangerous, the animals or the other cars that don't follow instructions, as it was clearly marked as a no stopping zone. I understand if there were animals on the road, but not for animals near the road.

Picture: Paul is showing me his gun collection in Victoria BC. This vintage Russian gun might have been handy to clear the animal-related road blocks in Yellowstone. 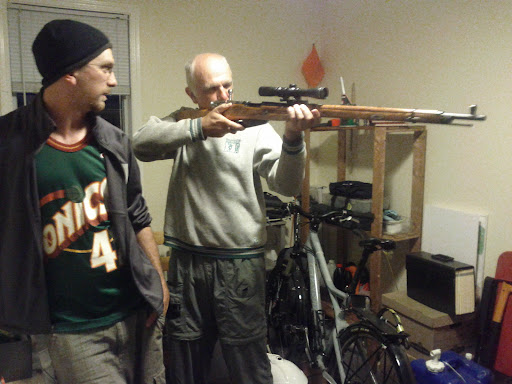 Posted by Lost Motorcyclist at 9:36 AM